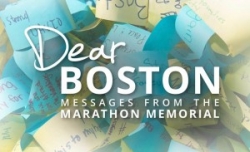 On April 15, 2013, two bombs went off at the finish line of the Boston Marathon, transforming the city, its residents, and the runners and visitors participating in this world-famous event. Almost immediately, a makeshift memorial began to take shape, first at the police barricade at the intersection of Boylston and Berkeley Streets and later at Copley Square. People from across the globe left flowers, posters, notes, t-shirts, hats, tokens of all shapes and sizes, and—most significantly—running shoes.

In June 2013, the memorial was dismantled and these thousands of objects were transferred to the Boston City Archives for safekeeping. To mark the one year anniversary, a selection of items from the memorial collection will be displayed in the McKim Exhibition Hall in the Boston Public Library in Copley Square, so visitors can once again experience the outpouring of human compassion they represent.

Other Events in Boston Public Library