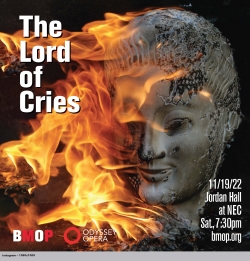 The Boston Modern Orchestra Project (BMOP) and Odyssey Opera, two of todayŌĆÖs leading innovators on the classical musical scene, present the East Coast premiere of John Corigliano and Mark AdamoŌĆÖs new opera The Lord of Cries. Considered to be one of the major operatic events of the new decade, Cries dwells on the dangers that result from the repression of our darkest desires, told through a plot that combines elements of Bram StokerŌĆÖs Dracula and EuripidesŌĆÖs The Bacchae. As part of BMOPŌĆÖs extended 25th anniversary celebration season, the full BMOP orchestra performs alongside one of todayŌĆÖs biggest opera stars, Anthony Roth Costanzo (Dionysus), and several rising vocalists, all at the helm of celebrated conductor Gil Rose. A world premiere recording follows on Pentatone.

Other Events in Jordan Hall