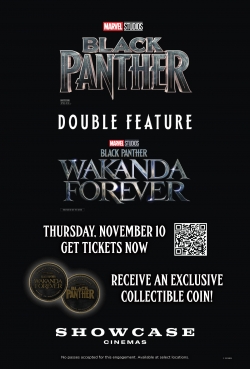 On Thursday, November 10, Showcase Cinemas invites you to be among the first to see Marvel Studios' Black Panther: Wakanda Forever, a special double feature event! Attendees receive an exclusive double-sided coin commemorating the event and 10% off a large combo or upgrade to exciting collector items.

Queen Ramonda (Angela Bassett), Shuri (Letitia Wright), M'Baku (Winston Duke), Okoye (Danai Gurira) and the Dora Milaje (including Florence Kasumba) fight to protect their nation from intervening world powers in the wake of King T'Challa's death. As the Wakandans strive to embrace their next chapter, the heroes must band together with the help of War Dog Nakia (Lupita Nyong'o) and Everett Ross (Martin Freeman) and forge a new path for the kingdom of Wakanda.

Tickets for this larger-than-life event are on sale now and can be purchased here: https://www.showcasecinemas.com/film-info/black-panther-double-feature.