PRICE: Tickets are on sale now, and can be purchased at https://www.showcasecinemas.com/film-info/met-summer-encore-la-fille-du-regiment 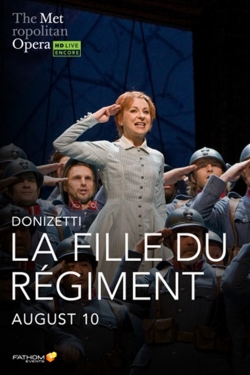 On August 10, The Metropolitan Opera is returning to the big screen at Showcase Cinemas with the MET Summer Encore: La Fille Du Regiment.

In this encore performance from 2008, madcap physical comedy and impeccable coloratura come together in Natalie Dessay's indelible portrayal of the feisty tomboy Marie, raised by a regiment of French soldiers. Tenor Juan Diego Flórez stars alongside her as the young Swiss villager who conquers her heart—and a slew of high Cs—in Laurent Pelly's charming staging.

Tickets are on sale now, and can be purchased at https://www.showcasecinemas.com/film-info/met-summer-encore-la-fille-du-regiment.