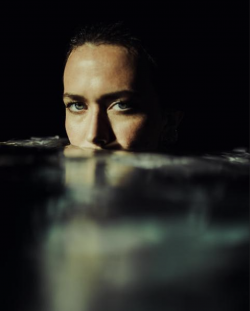 Music has always been around Margaux Sauvé. Born in Quebec to a family of musicians, she first picked up the violin at the tender age of 5. Moving on to the Conservatoire in Quebec, she eventually quit due to “missing the fun part of it.” But she still loved music, so she started to play violin in local bands. Singing came a bit later, as Sauvé thought that “to be a singer you had to have a powerful voice and be loud,” which is something that doesn’t come naturally to her as a quiet, thoughtful person. What’s more, the pop music on the radio whilst growing up in Quebec wasn’t connecting with her; so it wasn’t until she started to write music whilst studying psychology at university that her creativity and desire to express finally revealed itself. “It just opened a completely new path for me,” she says.

Writing music as Ghostly Kisses arrived at a moment when Sauvé was in “a living situation I was not able to get out of. A toxic relationship where I had a hard time understanding what was happening.” With this knowledge, it is understandable that most of her early music has a sorrowful, but exploratory mood—knowing there were things she needed to express, but not quite understanding how instinctively she was writing until years later.

With Heaven, Wait, her mesmeric debut album ready for release, her songwriting has developed to the point that—for the first time—she feels like she is part of the conversation. Able to view herself with an external eye, the album reflects transitions and rebirth. Sauvé is still talking about difficult situations, but with the ability to cast someone else in the lead role, giving the music a deeply personal, yet starkly universal appeal—one which she feels has come from “a more mature, adult way of looking at it.”

Heaven, Wait was recorded largely at home with her partner (in music and in life), Louis-Étienne Santais. Working separately in the same house, they would bounce ideas between rooms before coming together to rehearse the songs. Once they had the songs in place and were happy with them, they worked on the files in real time with producers Tim Bran and Thomas Bartlett.

Together, they have created an album that nods to her contemporaries like Billie Eilish and Aurora, blending pop songs in sophisticated production; but Ghostly Kisses looks back further, to Royksopp’s “Running to the Sea” and to the indie pop band London Grammar. (Sauvé first learned to sing by trying to imitate Hannah Reid—a gateway to discovering her own way of singing.)

All in all, Heaven, Wait represents a new, more complete Margaux Sauvé. As she moves from the dark to the light, we have been offered a compelling snapshot of grief, growth, and desire.