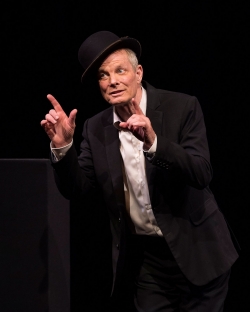 A fun, surprising trek through the works of one of the greatest dramatists of the 20th century.

In On Beckett, world-renowned actor and clown Bill Irwin explores a performer’s relationship to the works of legendary playwright Samuel Beckett—widely regarded as one of the greatest dramatists of the 20th century—incorporating passages from various works by the Irish writer, including Waiting for Godot, Texts for Nothing and Watt. Irwin’s physical approach to the comic and tragic sides of Beckett’s writing invites audiences to experience the writer’s language as they never have before. This intimate, fun-filled performance has been called “utterly delightful!” by New York magazine and “captivating…radiant, living theater” by The New York Times.

Bill Irwin’s original stage works include The Regard of Flight, The Happiness Lecture and Old Hats. He won Broadway’s Best Actor Tony Award for Who’s Afraid of Virginia Woolf?, and picked up a second statue for Fool Moon (created with David Shiner) which earned four Tony nominations. His many television credits include "Elmo’s World" (as Mr. Noodle) and "Legion" (Mr. Loudermilk), and his film credits range from Rachel Getting Married to The Grinch Who Stole Christmas. His many awards include one of the MacArthur Foundation’s “genius” grants.