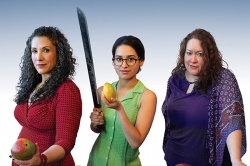 Just outside of San Juan, three sisters wrestle with what it means to stay true to self, familia, homeland and…how to best seek their revenge.

This brilliantly funny drama follows three sisters dealing with the challenges of caring for ailing parents, the legacy of family trauma, identity and claiming one's place in the world. While the play at first glance is a family drama, it is also a powerful allegory—a metaphor for the abusive paternalistic colonial relationship that the U.S. has with the island of Puerto Rico.Don’t Eat the Mangos is a co-production between Apollinaire Theatre Company and Teatro Chelsea, and is directed by Mariela López-Ponce.Performances of Don’t Eat the Mangos are April 15–May 15, 2022Fri. & Sat. at 8 p.m., Sun. at 3 p.m.Tickets can be purchased by calling (617) 887-2336 or on-line at www.apollinairetheatre.comInformation and directions at www.apollinairetheatre.comRunning Time: estimated 90 minutes