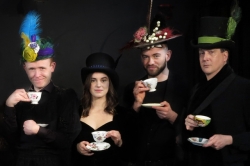 Four actors take on nine characters for 15 nights of high octane fun with Oscar Wilde's The Importance of Being Earnest! Join us for this meta-comedy as some of Apollinaire's favorite actors bring you on their wild ride through this Wilde production.

Actors Brooks Reeves (The Strange Undoing of Prudencia Hart, Hamlet), Kody Grassett (The Strange Undoing of Prudencia Hart), Ron Lacey (Uncle Vanya, Pool No Water) and Apollinaire newcomer Abigail Erdelatz play the the young lovers who fall in love with Ernest, the irresistible bad boy of London society. The trouble is, Ernest doesn't exist. Under the watchful eye of Lady Bracknell(s), will the pairs of young lovers untangle their own web of lies, and will the newly minted Ernest win her approval despite an unlikely start in life in a handbag abandoned at Victoria station?
Oscar Wilde's "Trivial Comedy for Serious People" has entertained with its on-point social satire for over a century. Wilde’s much loved masterpiece throws love, logic and language in the air for a dazzling evening of theatrical fireworks.
Performances of The Importance of Being Earnest are November 19–December 19, 2021
Friday & Saturday at 8 p.m., Sunday at 3 p.m.
Performances are at the Chelsea Theatre Works, 189 Winnisimmet St., Chelsea.
Tickets are $30, $25 seniors, $15 students
Tickets can be purchased by calling (617) 887-2336 or on-line at www.apollinairetheatre.com
Information and directions at www.apollinairetheatre.com
Running Time: estimated 95 minutes
See Less