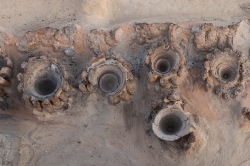 The remains of a 5,000-year-old brewery found in the ancient Egyptian city of Abydos are providing insights into the relationship between large-scale beer production and the development of kingship in Egypt. Archaeological evidence indicates that the Abydos brewery produced beer on a truly industrial scale—something unparalleled in early Egypt. Matthew Adams shares findings from recent excavations at the brewery and considers it in context as part of a broad pattern of royal activity at the site that served to define the very nature of kingship at the beginning of Egypt’s history.

Other Events in Virtual Event