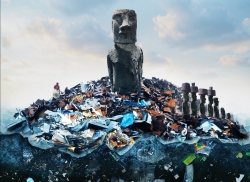 In a cinematic letter to his son, native Rapanui (Easter Island) filmmaker Sergio Mata’u Rapu explores the modern dilemma of their people who risk losing everything to the globalizing effects of tourism. The film follows four islanders, descendants of the ancient statue builders, who are working to tackle the consequences of their rapidly developing home. These stories intertwine to reveal the complexities of development and the contradictions within us all as we are faced with hard choices about our planet’s future.

Other Events in Virtual Event