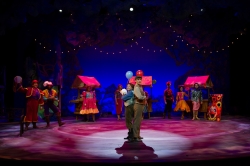 Based on the beloved classic novel by Natalie Babbitt, which also inspired a 2002 Disney movie, this magical, musical adventure is fun for the whole family and a dazzling spectacle for The Umbrella Stage Company’s award-winning design teams.

Eleven-year-old Winnie Foster (Madi Shaer) years for a life of adventure beyond her white picket fence when she stumbles upon the Tuck family and their secret to everlasting youth and faces the extraordinary choice of returning to her ordinary life or continue with the Tucks on their infinite journey.

The Umbrella Stage Company is the first professional company to bring this show to area audiences, and delighted to present it in their brand new mainstage theater in Concord Center.

Based on the novel by Natalie Babbitt

Robert Saoud* as Man in the Yellow Suit

The Umbrella’s Stage Company’s expanded, six-show season ranges from high-kicking spectacle to punk rock musical to socially urgent drama. With shows alternating between a 344-seat mainstage and flexible 100-seat blackbox, it will be the first season staged in The Umbrella Arts Center’s brand-new, state-of-the-art, multi-theater performing arts facilities at 40 Stow Street, in the heart of the historic Concord Center Cultural District. Season, Flex Pass, Group and Individual tickets are available, and patrons can make a night of it thanks to Dinner-and-a-Show deals offered by several Umbrella Hospitality Partners.

Other Events in Umbrella Arts Center, The