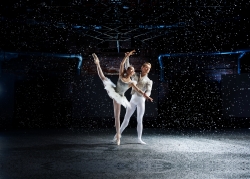 Boston Ballet’s 2019-2020 season continues with Mikko Nissinen’s The Nutcracker, a beloved holiday tradition featuring the iconic music of Tchaikovsky. With sets and costumes by award-winning designer Robert Perdziola, the production has been delighting audiences and critics since its world premiere in 2012.

In The Nutcracker, a young heroine, Clara, journeys through a magical world of imagination filled with dazzling characters such as a Dancing Bear, an enchanting Snow Queen and, of course, the heroic Nutcracker Prince. From the captivating Dance of the Sugar Plum Fairy to the magnificent snow scene, The Nutcracker continues to enthrall audiences of all ages, so make Boston Ballet a cherished part of your family’s holiday memories.

The Nutcracker opens November 29, with performances through December 29. All 41 performances take place at the Citizens Bank Opera House. The performance length is approximately 2 hours, including one intermission.