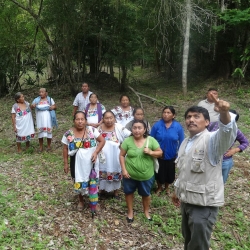 The story of Maya culture as a once-great civilization that built towering pyramids in the jungles of Central America was developed and popularized by national governments, anthropologists and archaeologists. Previously unable to control the story of their own culture, Maya communities today are actively reframing their heritage and centering their most recent history—not the distant past—to regain power and self-determination. Richard Leventhal discusses the importance and role that the 19th-century Caste War—one of the largest and most successful Indigenous rebellions—is playing in the Maya’s contested heritage.

Presented by the Peabody Museum of Archaeology & Ethnology and Harvard Museums of Science & Culture in collaboration with the David Rockefeller Center for Latin American Studies, Harvard University.