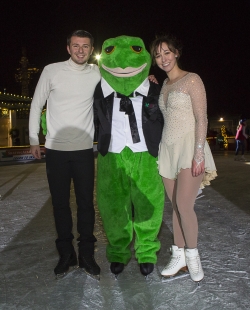 The Skating Club of Boston, the third oldest skating club in the United States, honors Olympian Scott Hamilton and his CARES Foundation as part of the grand opening celebration of their new, best-in-class facility located in Norwood, Mass. The annual Boston Tree Lighting Skating Spectacular at the Boston Common Frog Pond takes place on Thursday, December 2 at 5 p.m.

The Skating Spectacular, which is free and open to the public, offers the public a chance to see national and international competitive figure skaters, soloists, groups, wee skaters and Team Excel Synchronized Skating and Theatre On Ice of Boston teams all in the middle of the historic and iconic Boston Common.

Scott Hamilton is on hand to greet skaters and the general public and talk to the crowd about his CARES Foundation, which supports cancer research, education and survivorship.

The general public can support the CARES Foundation and The Skating Club of Boston’s local initiative at https://fundraise.scottcares.org/Boston. Proceeds from these events benefit CARES Foundation, Dana-Farber Cancer Institute and Mass General Brigham.

Other Events in Frog Pond on Boston Common