PRICE: Free and open to the public. 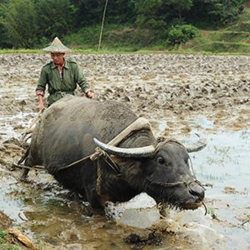 As the earliest farmers began to select wild plants and animals that had desirable traits, they initiated a series of genetic changes in these species that gradually made them more suitable for agriculture. Plants became easier to grow, had greater yields and were of higher quality. Animal species exhibited favorable changes in behavior, coat color and reproductive traits. Barbara Schaal discusses how the artificial selection of these species—a pivotal technological achievement—has influenced their genetics, evolution and capacity to flourish in the care of humans.

Lecture. Presented by the Harvard Museum of Natural History.

Series supported by a generous gift from Drs. Herman and Joan Suit

This event will be livestreamed on the Harvard Museums of Science & Culture (HMSC) Facebook page and the HMSC website. A recording of this program will be available on the HMSC Lecture Videos page approximately three weeks after the lecture.

Barbara Schaal is a nationally recognized plant evolutionary biologist. She uses DNA sequences to understand evolutionary processes such as gene flow, geographical differentiation and the domestication of crop species. Schaal was among the first plant scientists to use molecular biology-based approaches to understand evolutionary processes in plants, and she has worked to advance understanding of plant molecular systematics and population genetics. Schaal has been president of the Botanical Society of America, the Society for the Study of Evolution and the American Association for the Advancement of Science. She is an elected member of the American Academy of Arts and Sciences and the U.S. National Academy of Sciences, where she served as vice president for eight years. She was appointed as a U.S. science envoy by former secretary of state Hillary Clinton. Schaal has served as chair of the Division on Earth and Life Studies at the National Research Council and was a member of former president Obama’s Council of Advisors for Science and Technology from 2009–2017.