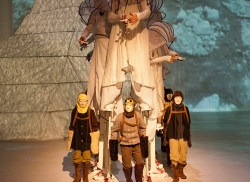 Sir Ernest Shackleton’s 1914 trans-Antarctic expedition is one of the greatest feats of endurance ever attempted. When their ship sinks in its quest to traverse Antarctica, the goal of the explorer and his crew changes from discovery to survival. In 69˚S., this jaw-dropping tale of willpower at the edge of the world is brought to life through a magical combination of dance, life-sized puppetry and cinema. An evocative original score by Erik Sanko is played by the Kronos Quartet, with additional live music by Skeleton Key, drawing audiences further into a tale that inspires us to look at our own relationship with our planet.

During the dreamlike 65-minutes of this journey, which The Boston Globe remarked, “not one of which is wasted,” you’ll understand why theatregoers who first caught the show at ArtsEmerson in 2012 have been raving about it ever since. Phantom Limb Company returns with their multimedia masterpiece, 69˚S., an innovative meditation on the limits of human determination and the urgency of climate justice that will leave you absolutely speechless.